Due to Coronavirus the 2021 programme has been suspended until further notice. 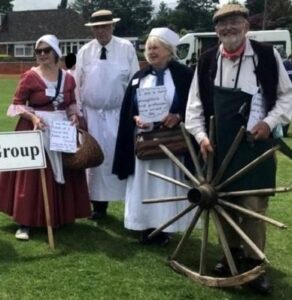 Despite the restrictions not being fully lifted as expected, the Wroughton Carnival 2021 took place albeit without the parade. The History Group decided to support the event by entering the fancy dress as Wroughton trades through the ages.

All the characters were based on real Wroughton figures.

The group were a creditable second in the group competition

The rain held off and a good time was had by all.

The Group also had a stand selling the WHG books (details of all the books can be found on this site) – and much more importantly,  we were able to catch up with other members we had not seen for several months.

We hope to restart events later this year – watch this space…

We are all living through a time that will be studied in history! Wroughton History Group would like to record what our village is going through and that means you, recording your story and we will put it in a time capsule to be opened in generations to come. You can write anonymously or put your name, but we would like your age group.

This is open to all and we would like to encourage the young, teenagers and not so young to contribute. The only criteria is that you must either live or work in Wroughton. Stories, photographs and drawings most welcome. Please email  meredithfiona@btinternet.com. Please support us to tell your story in lockdown and record our village life otherwise our stories will be forgotten by later generations.

The history group have produced a walk booklet that features many of buildings mentioned on the site (including racing stables, mills, manor houses and ‘lost’ pubs).  The walk is a booklet that can be downloaded and printed: Wroughton Village Walk – something to do until the meetings start again!

A regular programme of events and meeting is usually  held throughout the year. Meetings are held in St Joseph’s Church Hall, Devizes Road, Wroughton from 7.30pm to 9pm. See programme page for details of all meetings and events.   Open evenings are for everyone to get together over tea/coffee and chat about events – members often bring items of interest, such as old photographs, for a group discussion.

If you would like to join us please turn up at one of our meetings. All are welcome to join meetings at any time –  your first visit will be FREE just to see if you like us and then non-members are charged £2 per visitor payable on the night. You will find us a very welcoming and happy crowd.

Roman remains have been found on the airfield. Cotswold Archaeology have been examining the site of the new Science Museum storage facility.

A Romano British cemetery was discovered containing 20 graves. As the burials were of varying ages, they are likely to be from the local settlement. Two brooches found suggest the site dates to the 2nd century AD. Also found were lime kilns that produced the mortar used in Roman buildings and loom weights used in making cloth. The group celebrated the discovery as part of the 2019 carnival

Details of all our books can be found on our books for sale page.

Today we continue our research into old local newspapers and have been transcribing the census returns, trade directories, and records of births, deaths and marriages for the village so that these details will be easily available for future research.

Although we are very serious about our research but we do have a lot of fun too. We never fail to have a laugh at our meetings and we very much enjoy our annual outing and trips to local villages and places of interest in the summer, not to mention our pleasure in taking members of other history groups round the older parts of Wroughton.

Our simple constitution can be viewed here

With the threat of war in the 1930s the government set up a programme of airfield building including one on a high plateau to the south of Wroughton occupied then by Rectory Farm. The initial setting out took place in May 1939 by driving a timber fence post in to the ground at each end of the proposed mile long main runway. The airfield was opened less than a year later on April 1st 1940.  It was set up as an MU (Maintenance Unit ) and during the second world war some 7,000 aircraft were prepared for service at Wroughton.

The airfield continued as a RAF MU until 1972 when the Royal Navy took over as by then most of the work was on helicopters for which the RN was responsible.

In 1992 the airfield was closed as a military establishment and the site was passed on to the Natural Science Museum to be used as a museum and also as a storage facility for many of their larger items which could not be accommodated in London. A museum was set up containing many interesting exhibits including a Comet and a Constellation air liner. The airfield was used for air displays such as the War Birds during the 1980s and 1990s, although now, unfortunately, the museum is only open on special occasions and the runways are rarely used.  It is hoped that the new Science Museum storage facility being constructed will be open to the public.  A purpose built store has been constructed on the airfield site to hold the Science Museum’s amazing collection of old scientific books and documents, all of which can be viewed by the public on application.

The RAF hospital continued in use after the war and when possible took in local National Health Service patients, with whom it was very popular due to its high standards of treatment and nursing. The hospital was renamed the Princess Alexandra hospital in 1967 following a visit by the Princess. It was closed in December 1995 and the site was developed to include a housing estate called Alexandra Park and a hotel and leisure centre. There is now a vast array of solar panels installed on the airfield to provide renewable energy.